This January UM Professor of English Literature Brady Harrison’s novella The Dying Athabaskan won the inaugural Publisher’s Long Story Prize. The prize, awarded by Twelve Winters Press, aims to promote and fill the space of publishable stories that fall between the length of a traditional short story and novel. At eighty-one pages, The Dying Athabaskan fits that bill quite nicely. Short enough to read in one sitting or long enough to break up over a few evenings, stories of this length can utilize both the compressed, distillation of a short story and the novel’s ability to let a story unfold and turnover, which also creates the difficulty of writing such a story. Professor Harrison plays with the tension between compression and unfolding breaking up his book into two parts with sixteen chapters all together, varying the perspective and form—chapters changing from different characters’ first-person perspectives, Q & A interviews, a play-like section, among others. The shifts in form unmoor the reader, requiring reorientation and continued engagement from them. To further complicate the picture the plot of The Dying Athabaskan centers around characters themselves who are unreliable and inspire a sense of incredulity from the outset that only becomes stronger as the story unfolds.

Cover of “The Dying Athabaskan”

Cover of “The Dying Athabaskan” and Brady Harrison

Ritu Agarwal, a freelance writer, receives the assignment to interview Niall O’Keevan, a famous, aging Canadian sculptor “touted as the Glenn Gould of stone” and “notorious fabulist.” Reluctant at first due to O’Keevan’s notable irascibility and tendency to make stories up on the spot for his interviewer, Ritu (a name derived from Vedic Sanskrit meaning either a fixed point in time, especially for sacrifice, which in turn comes from Rta with a literal meaning of “order or course of things,” Wikipedia informs me) agrees out of the financial desperation characteristic of her chosen vocation. The assignment proves as difficult as she imagines. After a tall tale concerning the genesis of O’Keevan’s most famous sculpture, the eponymous The Dying Athabaskan (a large family of indigenous languages of North America), Ritu decides to take matters further into her own hands, continuing the process of trying to pin down the story for herself.

The Dying Athabaskan depicts a mortally wounded individual, broken bones and missing limbs, in what appear to be the last moments of his life. A similarity of bodily position to the famous sculpture The Dying Gaul is noted. But where that sculpture reputedly was commissioned in victory over a conquered people, The Dying Athabaskan does not convey a jubilant creation. The subject of O’Keevan’s sculpture also does not have the features of any one individual but looks like a mish-mash of many different people, who in their collision deformed one another and wounded each other. Ritu becomes compelled by the sense of anguish in O’Keevan’s sculpture, unable to comprehend what inspired his masterwork, which came early in his career. O’Keevan’s reticence on the matter compels her further. 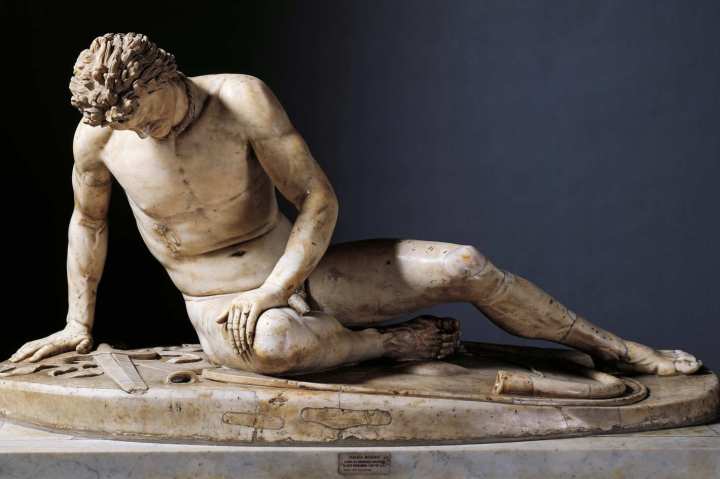 The Dying Athabaskan, the novella, tells a story of people of many different backgrounds—as the Indian name of Ritu, Irish of O’Keevan, indigenous Athabaskan, and a later Trinidadian character indicate—coming into contact with one another on Canadian soil and the impact that each has on the lives of the others. Professor Harrison’s narrative questions how much of our own narratives actually belong to us, how much are they the work of other people, what does truth look like? There are numerous references to Canadian culture—Glenn Gould, the pianist; Margaret Atwood, the novelist; The Group of Seven, both a group of Canadian landscape painters and a group of industrial countries that Canada belongs to (along with Italy, Japan, the United Kingdom, France, Germany, and the United States)—most of them factual, some of them more ambiguously so—whether or not Ram Finlayson is a real architect and known as the Canadian Frank Lloyd Wright remains up for question, after ten minutes of Google searches. Through the use of these cultural references, vernacular language (as in windscreen for windshield and toque for what in the U.S. is often called a beanie), references to the landscape, weather, and industry Professor Harrison creates a coherent picture of late twentieth- or early twenty-first-century life in Canada—albeit with some exaggerated aspects. But through this picture how much can one really say they know anything about that country, or the people who inhabit it? Of course, that may not be the point of The Dying Athabaskan.

However, through the sense of intimacy Professor Harrison evokes in his novella, the reader unfamiliar with Canada and its history could be forgiven if they thought they possessed actual knowledge of life there, or, at least, what it feels like. That is, after coming into contact with The Dying Athabaskan being curious enough to keep thinking about the life of the characters after the ending, what shaped them, and that relationship to reality. Often when we come into contact with other people we appropriate their narratives from them, imagining that we know them, when in reality we know so little about one another. This is true also of history and history’s influence on the individual. The appropriating and creating of narratives for things we have little knowledge of is a natural course of the human mind. The Dying Athabaskan provokes the reader to think about the nature of the truths we tell ourselves and others—how those narratives are caught up with the contact we have with people and facts outside ourselves. Professor Harrison’s novella has the length that lends itself to allow the reader a sense of familiarity with the characters, but the brevity where that sense of familiarity is mostly false. Written with clarity The Dying Athabaskan ends with an image that will leave me pondering some of the darker aspects of the story for some time. Buy it on Amazon, $6.99.

Friday, Feb. 23 Sanjiv Bhattacharya will give a craft lecture ‘The I’s Have it: First Person Structure in Nonfiction’ 12:00-12:50 and a nonfiction reading at 7:00. Both in the Turner Hall Dell Brown Room, sponsored through the President’s Writers-in-Residence Series and UM’s Creative Writing program.